From the press-release:
One-of-a-kind concert experience featuring brand new, never-before-seen footage, live on-stage performances and special appearances from Jerry Schilling and Priscilla Presley.
Elvis Presley, one of the most iconic entertainers of all time, is set to once again return to the stage for a one-of-a-kind concert experience – ELVIS: SEEN/UNSEEN. This show is one of the most unique concert experiences of recent years, and it will feature all new, never-before-seen footage and amazing on-screen performances from the King of Rock ‘N’ Roll, backed live on stage by the one and only TCB Band. 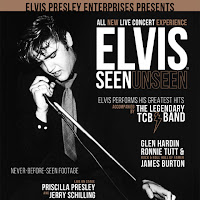 The first announced dates in the US debut tour include October 30 at The Wellmont Theater (Montclair, NJ), November 1 at Theatre at Westbury (Westbury, NY) and The Music Box at Borgata (Atlantic City, NJ) on November 2.

Marking 50 years since Elvis’ triumphant return to live performing - as he took up his infamous Las Vegas residency in 1969 - the 2019 tour will feature Elvis joined on stage by his original, hand-picked group– The TCB Band featuring Glen Hardin, Ronnie Tutt and Rock and Roll Hall of Famer, James Burton.

In addition to an amazing performance, the evening features special appearances by Priscilla Presley and long-term Elvis associate Jerry Schilling, who will be sharing intimate stories, personal photos plus rare home movies.
On the tour, Priscilla Presley said, “We’re back and better than ever! I am honored to be part of this return of Elvis to the stage, and to see The TCB Band once again bringing his music to life with new unseen footage and a few surprises. Jerry Schilling and I will be sharing stories and screening amazingly intimate home movies. This will be a once in a lifetime show... you won’t want to miss.