August 06 - Elvis Cars Up For Auction

This slightly battered old limousine may have seen better days – but it was once the regular ride of the most famous man on Earth. The 1967 Lincoln Continental Executive Limousine originally belonged to Elvis Presley, and will be offered without reserve at Mecum Auctions’ Monterey sale on August 15-17.

This car was a wedding gift to Elvis from his manager Tom Parker as he married Priscilla Beaulieu in  Las Vegas on May 1, 1967. It was used extensively by Elvis and Priscilla following the birth of their only daughter Lisa Marie in February 1968.

Unlike many of Elvis Presley’s vehicles, this one remained undocumented by historians and lost to the passage of time. Now it has reappeared, having spent decades hidden away in the private collection of the late Chicago businessman James Petrozzini.

Elvis "Loving You" Roadster up for Auction

Incredible Elvis Presley hot rod heading to auction for the fir st time. Whilst Elvis Presley’s love for cars is well known, one of the rides associated with his early film career has remained firmly untouchable. 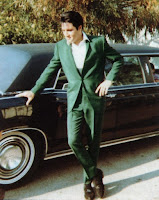 The 1929 Ford Roadster hot rod, used in the 1957 film “Loving You”, has remained in the possession of it’s creator. That is until now, as the widow of the hot rod pioneer John Athan, has decided to allow the Elvis Roadster to find a new home.

Despite the car impressing Presley with its performance, Athan refused to sell the Roadster to him. Instead, it remained in Athan’s own collection, and was regularly used up until the late 1970s.